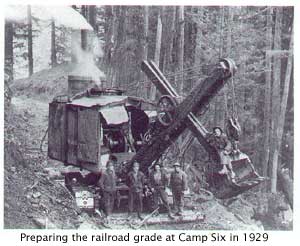 A Brief History of Caycuse(Camp 6)

Caycuse, a native name meaning scraping the barnacles off the bottom of the canoe, is located approximately 20 km outside of Lake Cowichan on the South Shore of the lake.

At one time there were over 400 people living in Caycuse. Today the population is 65, 13 of which are summer residents. It has a fire department and a two lane bowling alley. 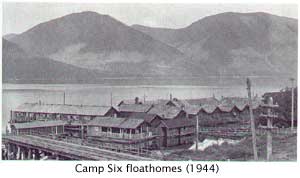 Some records of early logging around Camp 6 date back to 1902 when George Lewis was reported to have been logging in the Nixon Creek area. In 1905 Joe Vipond, a logging contractor who worked for the Cowichan Lumber Co., owned by the Mossom Boyd interests, ran a logging camp at Nixon Creek, using one of the earliest steam donkeys.

The history of Caycuse is tied in with Youbou when about 1909 the Empire Logging Timber grant included the area and vast forests back of it. A few years later the Empire Co. actually had a camp there which was later leased to the Genoa Bay Lumber Co. Later in the early 1920′­s the Jesse James Co. took over for a short time.

However, a continuous history of the area really started in 1927 when Gibson and McCoy formed the Cowichan Logging Co. They had contracts with the mill at Cottonwood (Youbou) and were logging Empire Logging Co. timber. They prepared for a permanent camp there and built for family accommodation. Many of the men from the Youbou area (Camp 2 and Yap Alley) moved across the lake and worked for Gibson and McCoy. Much of the camp was on float houses for many years, including the cook-house, bunkhouses, office and store. Although there were still float houses in use in the middle forties, more and more buildings appeared on land. In September 1927 there were enough children to start a school, indicating the growth of the camp. The first school was a building on land, the first teacher was Miss Mable Jones from Cumberland, teaching 15 pupils.

During the depression the camp was closed for two years but opened again in 1933. By 1935 the single school room was too small and two room school with basement was built. The school went from grades k-7 until 1987 when it went from grades k-6. The school shut down in 1989 as there were only 8 students attending and the school still stands along with the playground equipment.

On March 17, 1928 a community hall was opened. Several boat loads of people came from Youbou and Lake Cowichan for the celebration. Dances, concerts and parties became quite frequent. In the early days the camp had to provide its own entertainment. Getting away from camp as late as 1929 meant going by taxi boat to the Foot of the lake. After 1929 it was necessary to cross the Lake to Youbou. Movies were shown in camp for a number of years on a regular schedule.

For many years people clamored for a road to be built from Caycuse to Honeymoon Bay. Students going to high school at Lake Cowichan had to go by taxi boat and speeder but this ended when the road was built. It finally was completed in 1955. Now students went to high school in a heated school bus. In 1956 the road was continued to Nitinat (Camp 3). Actually, the road ended the link between Caycuse and Youbou, except for organization and business. The logging office headquarters was moved from Youbou to Caycuse. Camp 3 was later abandoned by B.C.F.P.

A new town site was laid out in the fifties. Larger and better houses were built and living conditions improved. The old unsightly buildings on floats disappeared. At one point in time, there were over 400 people living in Caycuse, in old bunkhouses. There were 3 big shops, the main one was where they repaired and held the trains for overnight. In the front of this main shop, there was a turn table where the trains could turn around.

In 1987 B.C.F.P. sold its holdings to Fletcher Challenge. Almost all of the residents of Caycuse have left, 65 people still reside there today, 13 of them who are only there in the summer.

Explore What Cowichan Lake Has To Offer!

From Accommodations to Restaurants, find out what to do while visiting Cowichan Lake